The basics of golf

Each golf club is designed for a different task.

Many beginners start with a basic set of clubs which could include a wood, 3, 5 & 7 irons, a wedge and a putter. Other clubs can be added as you become more involved. However, you may not carry more than 14 clubs in your bag.

Advice about the equipment which you need to start playing is available from golf professionals who are based at golf clubs, driving ranges or on-course and off-course golf retail stores.

The Rules of Golf are universal but unlike many other sports, are applied by the players themselves. Therefore, every golfer should carry a Rules of Golf book. The Player's Edition of the Rules of Golf is free and available from most golf clubs or state associations. The Rules outlined here are very simple but will assist initially.

Playing the ball as it lies

The Rules generally do not permit you to improve the position of the ball. You may not bend or break anything growing or fixed except in taking a fair swing. You are not allowed to press anything down (unless in the teeing area) but you can remove loose natural impediments such as stones, twigs or fallen leaves without penalty. In a bunker, you are not permitted to ground your club in certain areas (right before/after where the ball is at rest, in the backswing, in making a practice swing).

If you think your ball may be lost or out of bounds, you can save time by hitting a second ball from the same spot. This ball is called a “provisional ball” and you must tell your partners of your intention to play a “provisional” before doing so. You are allowed a maximum of three minutes to look for a lost ball. If you find your ball and it is in bounds, you must pick up the provisional and continue to play with the original ball. If your first ball is lost or out of bounds you must continue to play with the provisional ball counting all your strokes, plus one penalty stroke.

Sometimes a ball may land in a position where it is very difficult or impossible to hit. If you decide you cannot hit your ball you may declare the ball unplayable, except in a penalty area. You may then pick it up and drop it at one of the positions below adding one penalty stroke to your score.

If you declare the ball unplayable in a bunker and you decide to drop under options 2 or 3, you must drop the ball in the bunker for one stroke penalty;

OR you could choose to drop back outside the bunker for a two stroke penalty similar to 2.

If you hit your ball into a penalty area, you may play the ball as it lies or:

You can repair ball marks and old ball plugs, and any damage caused to the green by a person or outside influence, this does not include damage in the normal course of maintenance practices or natural wear and tear. You may remove leaves and other loose impediments on the line of your play and you may also mark the position of your ball to pick it up and clean it.

Most golf courses have Local Rules which are specific to their club. You will find these either on the back of the score card or prominently displayed at the clubhouse.

Golf is a technical game and players starting out are encouraged to seek instruction from a qualified golf professional. Taking individual or small group lessons in a starter program at a local club or driving range is also a great way to learn the basics before taking to the course.

The objective of the swing is to generate speed in the head of the club to propel the ball. It is not so much hitting at the ball, but making a smooth, rhythmical swing. Some basics to help get started are:

A good grip is extremely important in allowing both hands to work as a unit. Grip the club lightly and keep both hands close together. There are two recommended grip methods. Beginners may choose to start with the ten finger grip. As you play more frequently experiment with the overlapping grip which is used by most players.

To ensure the ball travels in the right direction, aim your whole body, including your feet, knees, hips and shoulders, parallel to the target lines.

A good stance is important to a good swing. Spread your feet to shoulder width, bend your knees slightly and bend forward from the waist at your hips so that your arms hang down. Spread your weight evenly on both feet.

Your feet should be positioned with the ball level with the inside of your front foot.

The full swing with a wood or long iron is used to gain maximum distance from the club you are using. There will be times when a full swing is more than you need and so you will follow the same principles with a shortened stroke.

A pitch shot is hit high into the air to stop close to its target. Swing the club approximately one half the length of a full swing.

Chipping involves playing a short shot where the ball lifts a little off the ground then runs along the ground for some distance. Use a mini-swing which is approximately one third the length of a full swing. The shorter your shot, the shorter the swing.

Bunker or sand shots may use all the different swing lengths and techniques dependant on how close the bunker is to the green. In greenside bunkers remember to hit the sand about 5 centremetres behind the ball using a lofted club.

Putting is a special skill used on the green to roll the ball into the hole. The putting stroke is a mini-swing using the arms and shoulders with no body or wrist action. The more upright angle of the putter allows you to look over the ball and along the line you wish to putt.

This sequence should be followed for all shots. Contact a local club professional or driving range to see what beginner programs they offer.

Addressing the ball: The position when you have taken your stance ready to hit the ball, and have also grounded the club (touching the surface or ground with the sole of the club). Airswing: A swing and a miss, which counts as a stroke.

Divot: Turf cut out of the ground by a club when making a swing. Dog-leg: A hole that does not follow a straight line from the tee to the green. It bends to the left or right. Draw: A shot that curves slightly from right to left for a right-handed golfer, and curves slightly left to right for a left-handed golfer.

Eagle: Two strokes under the par for a hole. Etiquette: A specific code of behaviour expected of golfers in relation to the course and other players.

Fade: A shot that curves slightly from left to right for a right-handed golfer, and curves slightly right to left for a left-handed golfer. Flagstick: A thin moveable pole with a flag attached, placed in the middle of the hole to indicate the hole’s location. It is also called the pin. Fore: A warning shouted to alert other players that a ball in flight is heading in their direction.

Gross Score: The actual number of shots taken for a hole or a round. It is also known as a “Scratch Score” or “Off the Stick”. Ground Under Repair (GUR): Marked areas of the course that are damaged or are under repair from which a ball may be lifted and dropped without penalty.

Handicap: A number allotted to you that reflects your ability or relative ability. The lower the handicap of a player, the better the player is relative to those with higher handicaps. Hazard: A term used to describe bunkers or water areas. Honour: The right of a player to hit off first having had the lowest score on the previous hole. Hook: A stroke which curves the ball to the left of the target, if made by a right-handed player, and to the right if made by a left-handed player.

Loose Impediment: Natural objects that are not fixed or growing, such as twigs, loose rocks, pine cones and leaves. Lost Ball: Any ball that cannot be found within 5 minutes of searching for it and wasn’t seen to go into a water hazard.

Marker: A person who keeps your score. Match play: A type of competition when two players compete against each other hole by hole, with the number of holes won, lost or halved deciding the match.

Net Score: The score after your handicap is deducted from your gross score.

Obstruction: Anything artificial or man-made whether erected or left on the course, as well as artificially constructed roadways or paths. Out of Bounds: Any areas outside the boundaries of the course in which play is prohibited.

Par: The number of strokes in which a hole is supposed to be played based on its length. Par also describes the number of strokes in which the course should be played (i.e. par for the course). Pitch Mark: An indentation made by a ball landing on a green or a fairway. It is also known as a plug mark. Provisional Ball: Another ball that is played when you think your ball might be lost or have gone out of bounds.

Slice: A stroke which curves the ball to the right of the target, if made by a right-handed player, and to the left if made by a left-handed player. Stance: The position of the feet when addressing the ball. Stroke: The forward movement of the club made with the intention of striking at and moving the ball. Stroke Play: A competition based on the total number of strokes taken, where each player competes against the rest of the field.

Teeing Ground: The area at which each hole commences, indicated by two markers. The ball must be played from between and from behind these markers. Through the Green: All of the area of the course with the exception of the teeing ground, the green and any hazard.

There are two basic forms of competitions at the amateur and professional level – match play and stroke play. 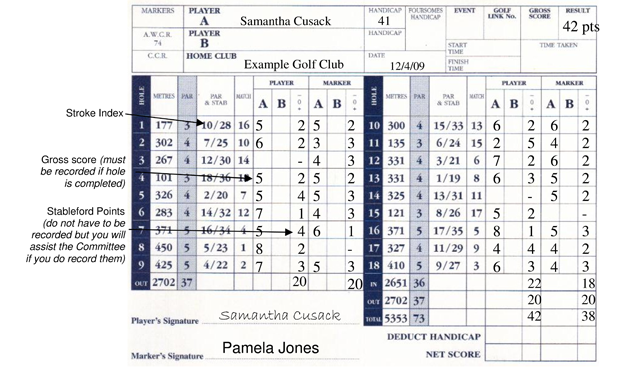