It was a big year in Australian golf. Martin Blake rates the highlights… 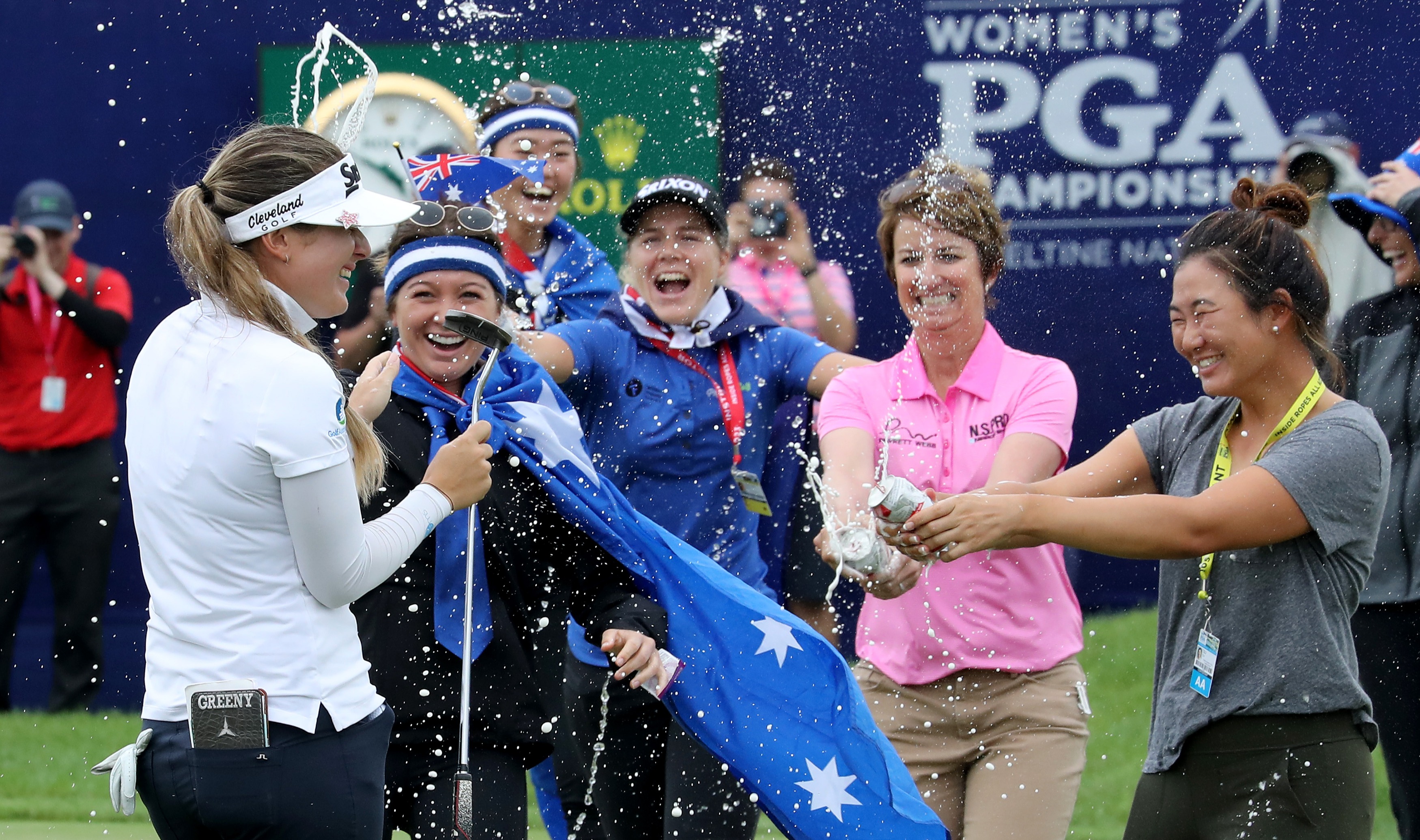 It doesn’t get any better than a major. When Green, just 22 out of Mt Lawley Golf Club in the northern suburbs of Perth, negotiated a metre-long par putt at the 18th hole at Hazeltine National in Minneapolis in June to win the Women’s PGA Championship, she became just the third Australian woman – behind Jan Stephenson and Karrie Webb – to win a major.

She’d done it wire-to-wire, taking a one-shot lead into the final round and having to survive a strong push by Sung Hyun-Park, at the time the world No. 1, among others. At the 72nd, Green was in the greenside trap and needed to get up-and-down. She did.

On the putting green, she was drowned in beer by none other than Karrie Webb, a mentor and maternal figure to her, and a bunch of Australians who were share-housing with her in Minneapolis for the week including two members of the Webb Scholarship squad – Grace Kim and Becky Kay. These made for iconic images: the passing of a metaphorical baton.

It was a gratifying moment not just for Green and her family and coach Ritchie Smith, but for all the people who saw her through the elite programs of Golf Western Australia and Golf Australia. Green was an outstanding amateur and had been making her way as a professional, albeit that she had been overshadowed by her state teammate Minjee Lee, who made much bigger early strides.

But the pot boils at different rates, and Green surprised quite a few people that week at Hazeltine, perhaps even herself. Only a few weeks later, she won again on the LPGA Tour to frank her major win and jump into the top 20 in the world.

For perspective only 14 Australian golfers of either gender have won majors. It is a feat worth celebrating, especially when it’s achieved by someone so gracious and giving as Hannah Green. 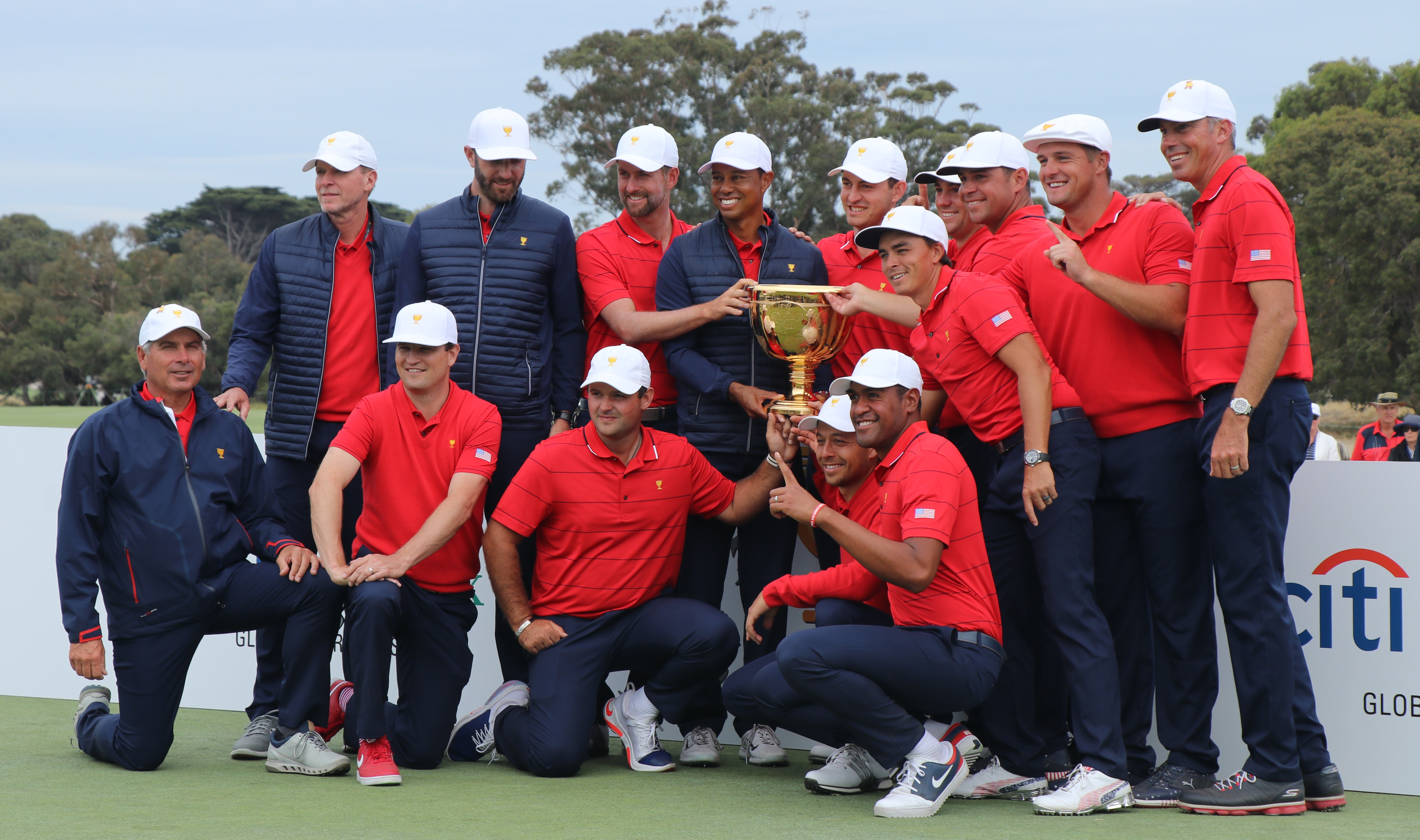 We all knew this would be good. But we didn’t know exactly how good.

There was always the concern that the talent-laden Americans – with all 12 players ranked inside the top 24 in the world – would smash Ernie Els’ International team at Royal Melbourne like they did in New York two years earlier. But they did not.

It took until the final stanzas for the Americans to get across the line, and came close to one of the greatest of sporting shocks. The USA, inspired by the great Tiger Woods, won 16-14.

Moreover, crowds of 30,000 or so filled Royal Melbourne each day and Australian golf found itself at the forefront of the public imagination for once. Not only that, the game – and the venue – presented itself superbly. 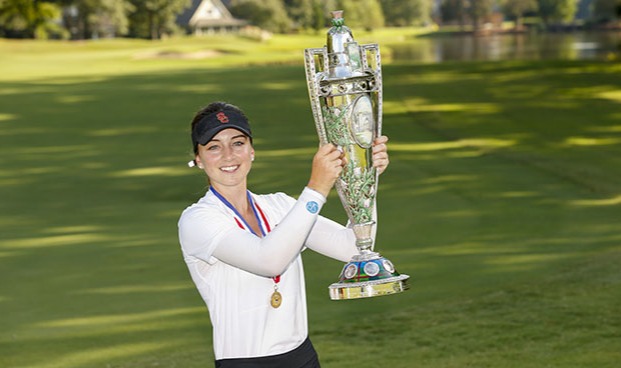 3. Gabriela Ruffels and the US Amateur

No Australian woman had won the US Amateur title before 19-year-old Gabi Ruffels’ triumph at Old Waverly Golf Club in Mississippi in August, a drought of 119 years.

Ruffels, who is studying at USC in California on a golf scholarship, was born in the United States but grew up in Melbourne with her family – former Australian Davis Cup player Ray, pro tennis player Anna Maria Fernandez and elder brother Ryan, himself a pro golfer already.

The astonishing part of her story is that she did not take up golf until she was 15, reaching elite level at tennis both in Florida and in Melbourne, where she was part of Tennis Australia’s programs. It was a desire to follow her brother that drove her to borrow her father’s clubs and play her first-ever round in December, 2014.

Needless to say it has been a quick rise in four short years. 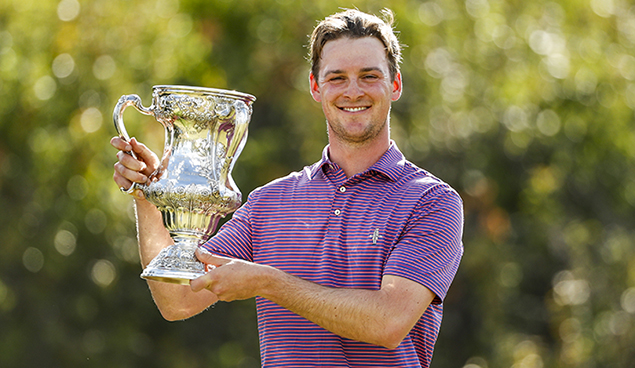 Melburnian Lukas Michel will play in the 2020 US Open and the Masters at Augusta National courtesy of his September victory in the US Mid-Amateur Championship at Colorado Golf Club – the greatest triumph of his career.

Michel’s case is unusual, in that he’s been an elite amateur for a long while. He was 25 at the time he won the championship, but he’s taken his time and found his own way to improve, with stunning results.

He came from three down twice in the 36-hole final and there was a dreadful mess at the final hole where his American opponent appeared to concede a putt to Michel before reneging on it. The Victorian had the last laugh though, sinking the putt to clinch his spot in the field at Augusta in April. 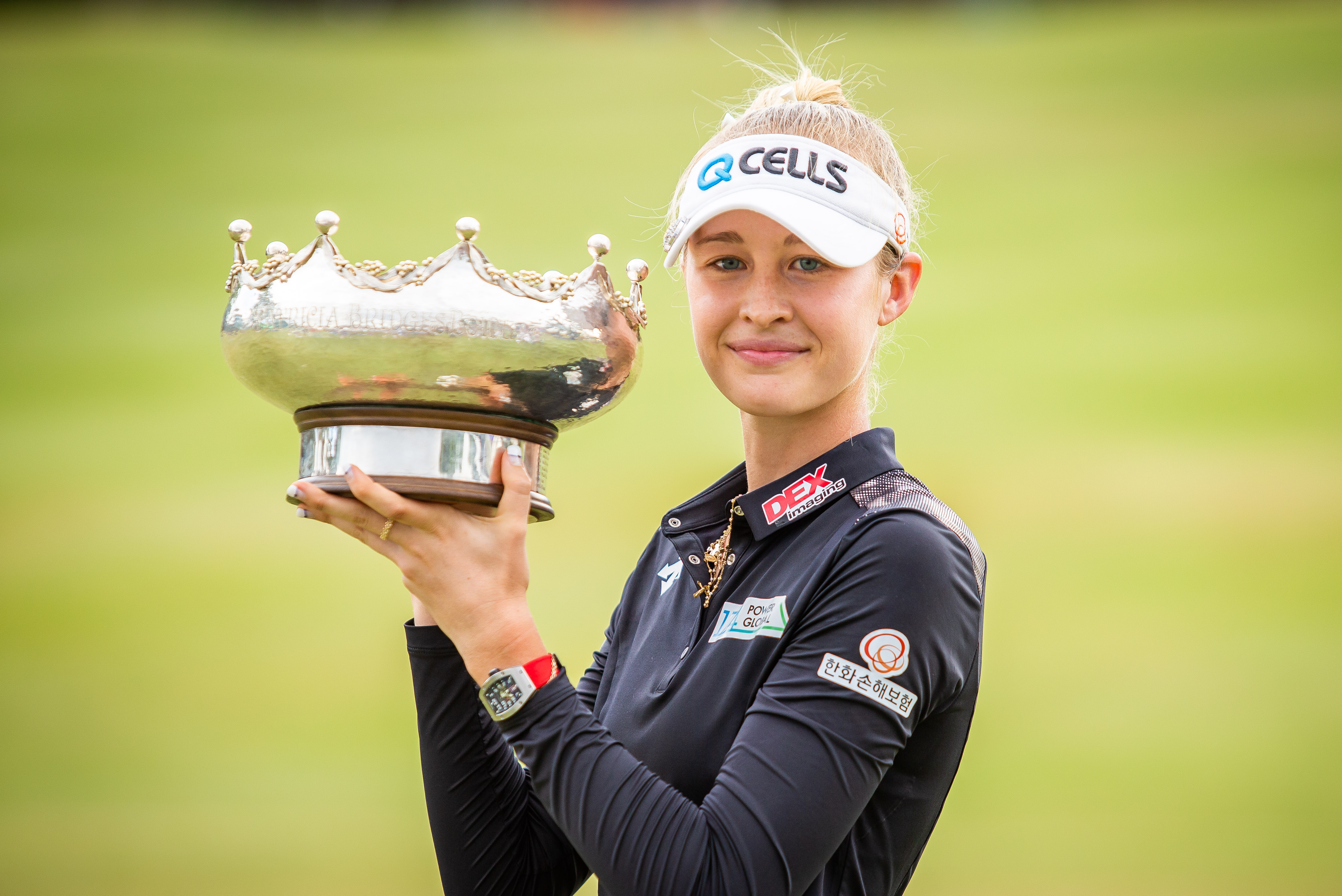 Nelly Korda is a phemenon. When she won the ISPS Handa Women’s Australian Open at The Grange in Adelaide in February, she joined her sister Jessica as winners of that title, and followed the footsteps of her father, Petr, who won the tennis Australian Open in 1998.

Augmenting the notion of a ‘Korda Slam’, her brother Sebastian had won the boys’ Australian Open tennis title the year before.

“Must be something in the air,” she said, having clinched the victory to end another fabulous women’s Open in Adelaide, where the championship seems to sit so comfortably on those sandbelt courses.

Not surprisingly the big-hitting Korda surged through 2019 and ended the year ranked No. 3 in the world. With a bullet. 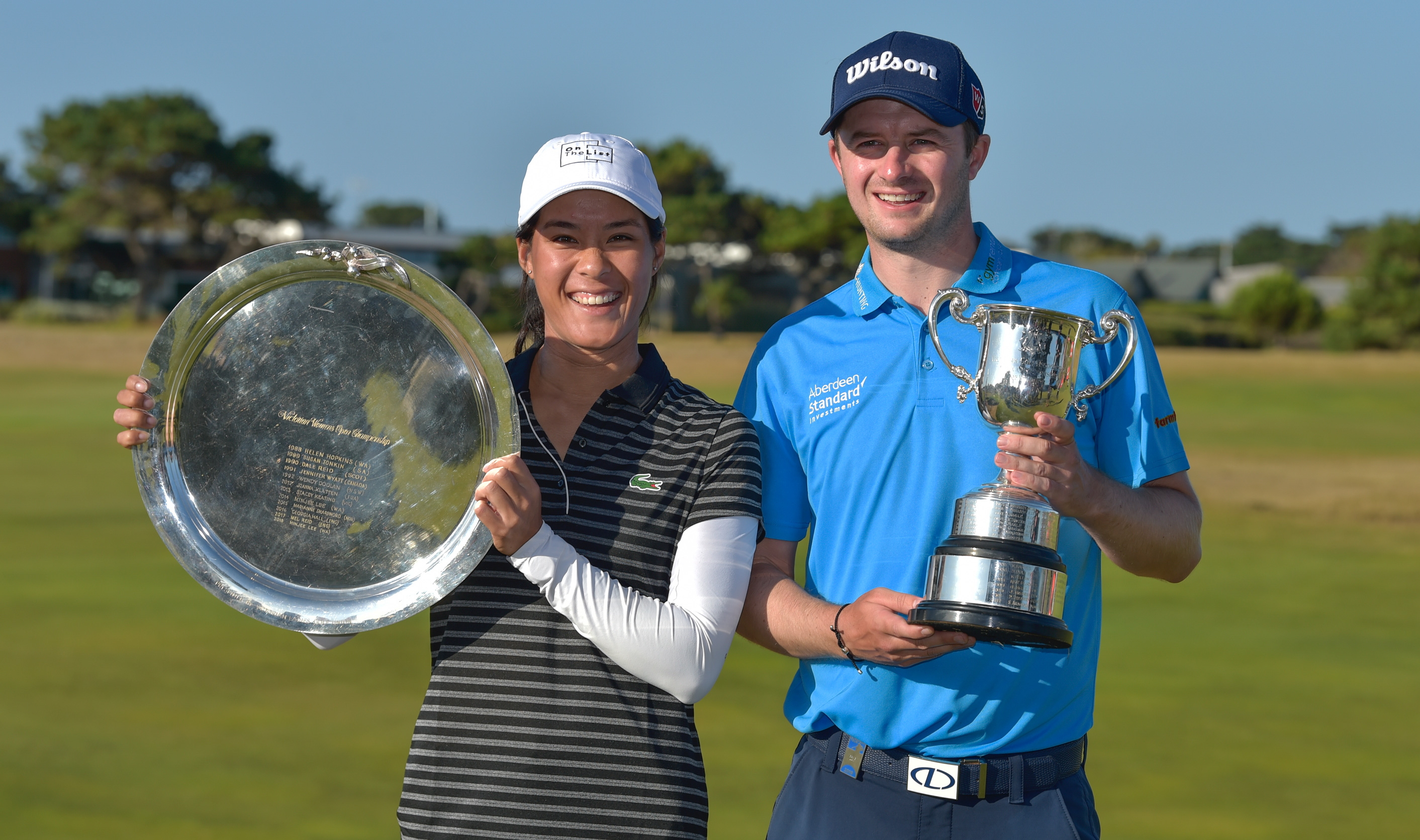 The ISPS Handa Vic Open is now Australia’s richest golf tournament at a combined $3 million and it lived up to its billing again in February, this time as both a European Tour and LPGA Tour event.

David Law of Scotland won the men’s title, hitting the best shot of his career to do it – a hybrid club from 195 metres to the par-five 18th at 13th Beach that nestled on the green and set up an eagle. Celine Boutier of France took the women’s title by two shots for her first LPGA victory.

Players continued to rave about the feel of the mixed professional event where the crowds are unencumbered by ropes and the atmosphere is relaxed. As golf presses for gender equity, it is an event that sets the standard. 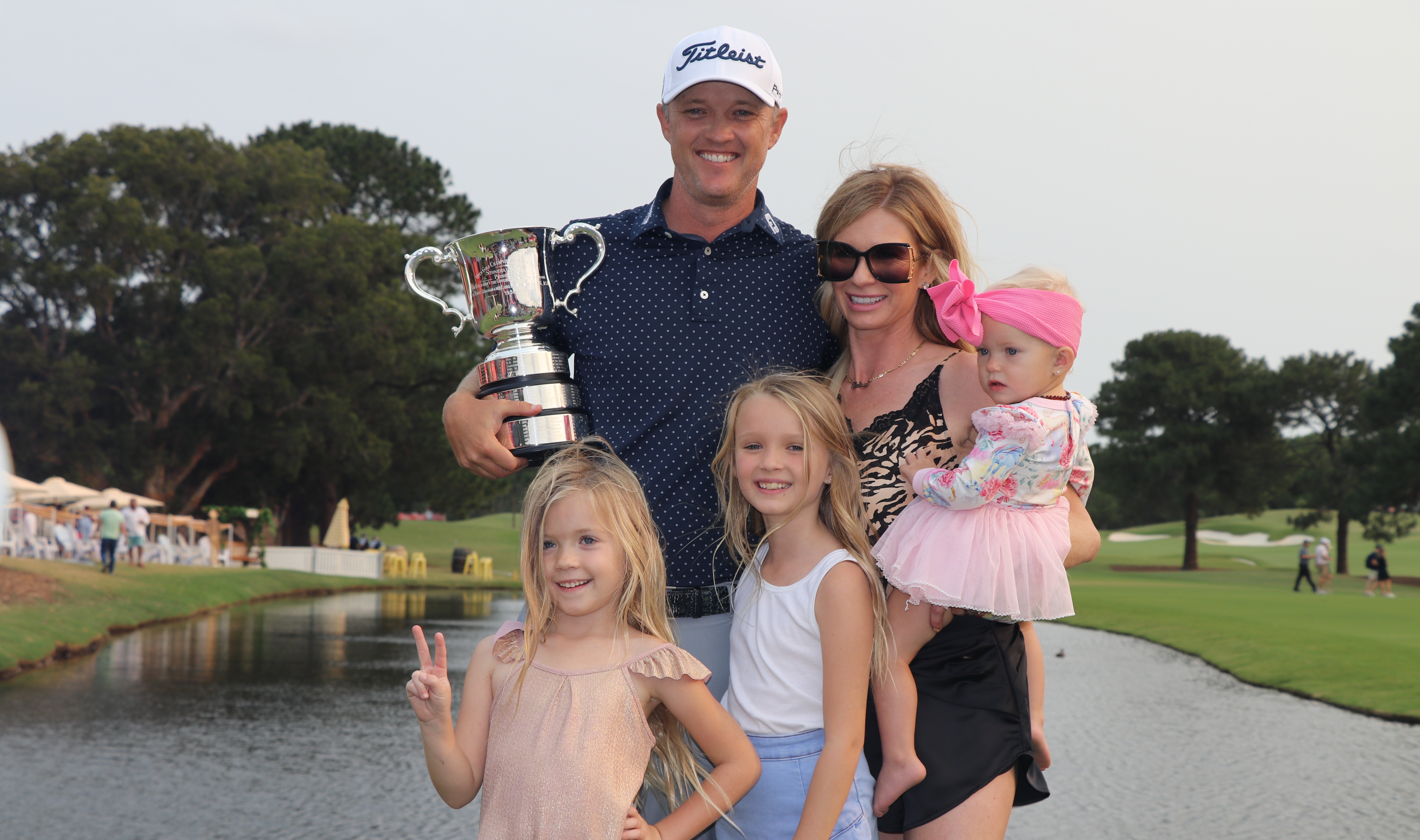 It was not a big year for Australian male professionals with no 2019 wins on the US Tour, but Matt Jones came home from America and joined some of the legends of the sport by turning himself into a two-time Australian Open champion.

Sydney’s Jones goes on the Stonehaven Cup trophy for the second time along with the likes of Gary Player, Jack Nicklaus, Greg Norman and Peter Thomson, to name but a few.

That he did it at his home course, The Australian in Sydney, only added to the romance. 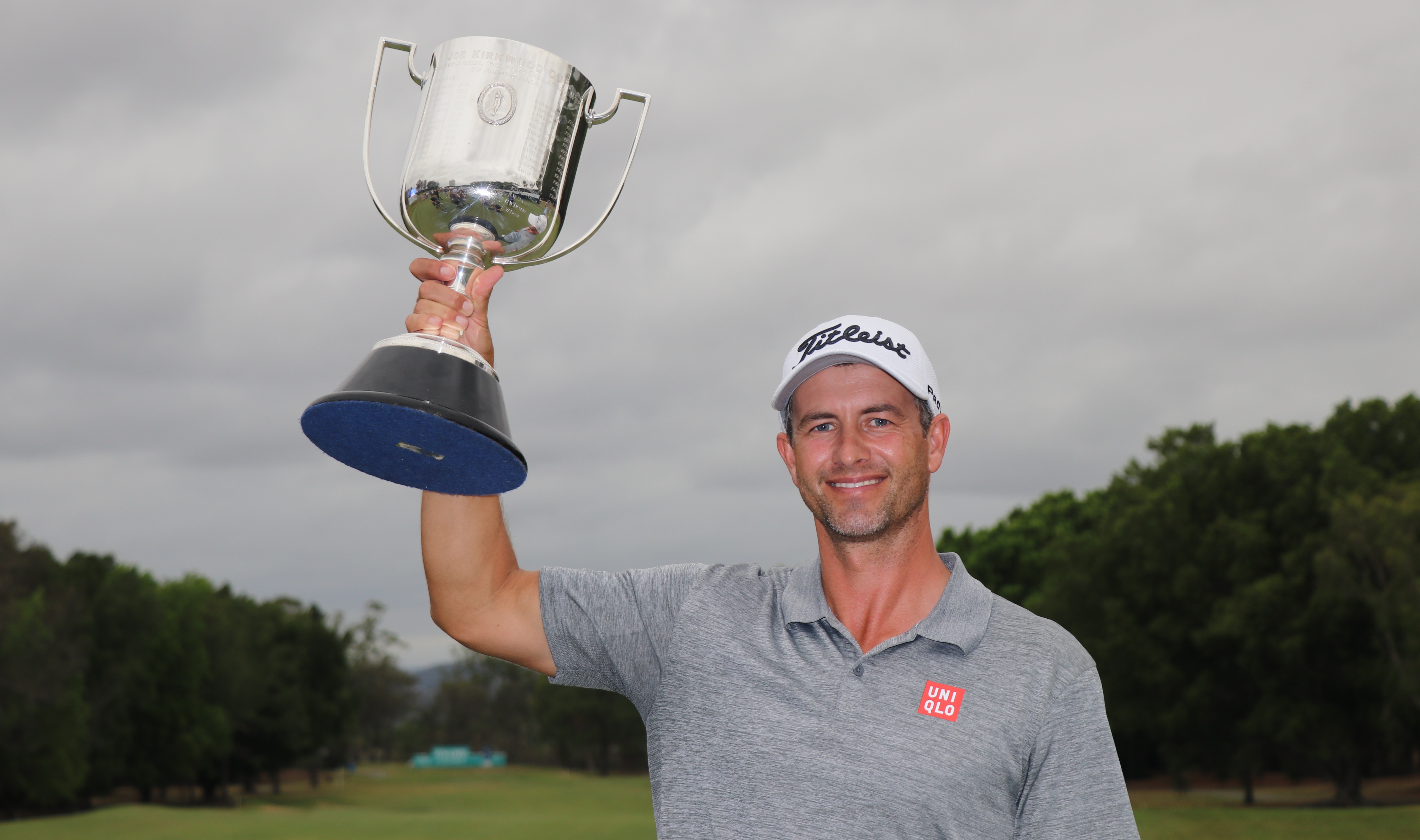 It had been “a long time coming” for Adam Scott, but the Queenslander finally sealed his first tournament win in almost four years at the 2019 Australian PGA Championships.

Scott’s win gave him his 30th professional title of his career and his second #AusPGA crown after his win at Royal Pines in 2013. Scott’s last tournament win came 3 years, 9 months, 16 days prior at the WCG Cadillac Classic in Miami where he beat Bubba Watson by a shot.

On the LPGA Tour Minjee Lee, Hannah Green and Su Oh, all 23, are among the best performers and Gabi Ruffels is working her way through college.

On the men’s side Min Woo Lee, 21, younger brother of Minjee, has some status in Europe and is tipped for great things, as is Ryan Ruffels, also 21, who has playing rights on the Korn Ferry Tour. Cameron Davis, the 2017 Australian Open champion, held his ground on the US Tour and has huge upside.

Top amateurs like David Micheluzzi and Blake Windred are finding their way.

And Presidents Cup star Cameron Smith, the Queenslander, is just 26 and getting better with every year.

These are exciting times for Australian golf. Watch this space.