The ISPS HANDA Australian Open will be packed with stars and Australia's favourites returning home, see below confirmed players with more to come.

The 150th Open champion Cameron Smith is coming home to his adoring fans this summer and is intent on capping off an unforgettable 2022. World No. 2 Smith is enjoying a career-best year having won the PGA Tour’s Sentry Tournament of Champions in January and THE PLAYERS Championship in March before his major breakthrough at St Andrews last month.

Australian Olympic representative Marc Leishman is coming home this summer. Leishman, 38, is a six-time winner on the PGA Tour and has recorded five top-15 finishes in the 2021/22 season. The world number 63 has consistently performed on the big stage having finished in the top-ten of major championships on six occasions (three times each at The Masters and The Open) and this summer is set to be no exception.

Lucas Herbert is making a homecoming for the Australian summer of golf in 2022 as he strives to win the glittering prize of his first big championship in his native country. Herbert has won on the DP World Tour (twice, in 2020 and 2021) and the US PGA Tour in 2021, but through ill fortune and the pandemic, he has not yet put a top-level Australian tournament on his curriculum vitae. His best result in the big events was tied-sixth in the Australian Open at The Australian in 2017, when he led through two rounds and ended up in the final group with Jason Day on the last day before succumbing to Cam Davis.

New Zealand’s top ranked male golfer Ryan Fox has confirmed his return to Australian shores. Fox, 35, is in the midst of a career-best year on the DP World Tour having won the Ras Al Khaimah Classic in February by five shots, coming runner-up at the Dutch Open in May and the Irish Open in July. He is currently fifth on the DP World Tour’s 2022 Rankings. Fox has a rich history in Australia too having won the ISPS HANDA PGA Tour of Australasia’s Order of Merit in 2019.

Seven-time major champion Karrie Webb is coming out of semi-retirement to chase another title at this year's Australian Open. Webb is the only person in history to have won the title at both Victoria and Kingston Heath Golf Clubs, so it is only fitting she compete again in 2022. Webb will hit the green off the back of some stunning form in 2022, after taking out her first senior title at the Senior LPGA Championship in July this year.

Ashleigh Buhai, 33, is the latest high-profile international to confirm a place in the tournament - and the South African’s commitment is a major coup. Earlier in the month she won her first major on the fourth playoff hole at Muirfield and, like Smith, she is eager to top off her stellar year down under.

Kipp Popert  Country: UK World ranking: 1 Age: 24 Bio: Has triumphed over cerebral palsy and numerous surgeries to his legs by crafting a great career in golf, including a climb to No. 1 in the world in 2021. Brendan Lawlor  Country: Ireland Age: 24 World ranking: 2 Bio: The man from Dundalk in Ireland has become the best All Abilities player in the world, and become the first All Abilities player to compete in a DP World Tour event. Has lived his life with a bone growth disorder but has now turned professional. Finished runner-up in the 2018 AAAC. Juan Postigo Arce  Country: Spain Age: 26 World ranking: 4 Bio: Amputee who is almost as famous for theatrically hurling his prosthetic right leg away and smashing drives off his remaining leg as he is for his golf. He he has won numerous All Abilities championships and competed in Australia before. Tommaso Perrino Country: Italy World ranking: 5 Age: 38 Bio:  Italian boys’ champion at 16 and took Franceso Molinari to the 18th hole in matchplay before a motorbike accident and subsequent complications from surgery took him away from golf for some years. Later took up coaching and now is focusing on playing as an amputee. Mike Browne Country: England World ranking: 6 Age: 44 Bio: Amputee who has bloomed in golf after a training accident while he was with the Royal Artillery Gunners and numerous subsequent surgeries until he had his left leg amputated in 2013. Turned professional in 2016 and has been a regular visitor to Australia for All Abilities golf. Kurtis Barkley Country: Canada World ranking: 7 Age: 34 Bio: Canadian star who was runner-up in this event in 2019. Born with scoliosis or curvature of the spine, he has been a lifelong golfer in the image of his golf-teacher father. Johan Kammerstad Country: Sweden World ranking: 10 Age: 46 Bio: Swede who has won both the first two versions of this event. Born without some bones in his right leg, he has had to endure a 20-centimetre difference in leg length. But he remains a force on the All Abilities stage, with four European championships to show for it. Mette Wegge Lynggaard  Country: Denmark World ranking: 43 Age: 38 Bio: The only woman in the field,  Wegge Lynggaard has become one of Europe’s best All Abilities players having resumed playing in her 20s after a break of more than 10 years. Born with cerebal palsy effecting her left side, she coaches disabled swimmers voluntarily. Geoff Nicholas  Country: Australia World ranking 14 Age:  61 Bio: A legend of Australian disability sport, Nicholas is a professional who has not only dominated the All Abilities space and won tournaments all around the world, he has competed strongly against able-bodied golfers, recently qualifying to play the Senior Open Championship. Born with a leg deformity caused by the morning-sickness drug Thalidomide, he had his right leg amputated. Cameron Pollard  Country: Australia World ranking: 22 Age: 23 Bio: A prolific winner of All Abilities championship, Pollard, who has managed Ehlers Danlos Syndrome and autism all his life, has established himself as one of Australia’s best. He hails from Sawtell on the NSW Central Coast and was one of the group who played in the first AAAC at an Australian Open in 2018. Stephen Prior  Country: Australia World ranking: 25 Age:  45 Bio: A member at Long Reef in Sydney, Prior lost the bottom of his right arm in a waterskiing accident, going on to become not only a great All Abilities player but one of the sport’s strongest advocates as president of Amputee Golf New South Wales. Mike Rolls  Country: Australia World ranking: 52 Age:  39 Bio: Double amputee whose wit and humour were captured in his book, ‘Ditch The Dead Weight’. Had both legs amputated after contracting Meningococcal Septicemia in 2001; now a great advocate for the sport and a world class player in his own right. 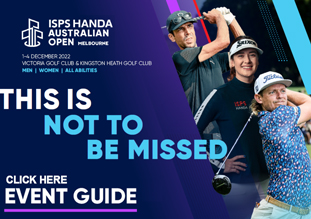