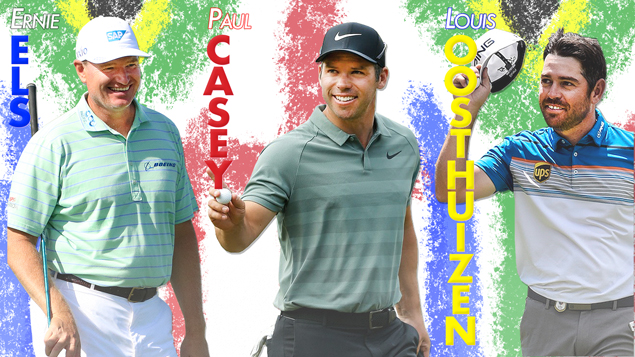 Three of the best swings in world golf will be on show at the 2019 Emirates Australian Open.

Hot on the heels of the announcement of Aussies Jason Day, Marc Leishman and Cam Smith chasing their first Stonehaven Cup, legendary Ernie Els, Paul Casey and Louis Oosthuizen are all coming to Sydney to play spoiler.

International team captain Els said he’d try to recruit a few of his Presidents Cup players to The Australian Golf Club from 5-8 December – and in fellow South African Oosthuizen, he has certainly been true to his word.

Sweet-swinging Oosthuizen, the third qualifier for the International team, is the 2010 Open champion and has also been runner-up at each of the other major championships. He’s currently ranked No.22 in the world.

Englishman Casey has been a champion on both sides of the Atlantic, including two victories on the PGA Tour in the past 18 months and remarkably has seven top-five finishes in the United States this season, culminating in his third place at the recent Tour Championship. He’s currently ranked No.17 in the world.

Both men will make their Australian Open debut in Sydney.

Four-time major champion Els has previously played in 2001 at The Grand on the Gold Coast, where he finished third behind Stuart Appleby.

And while Els prepares to lead the International team as captain for the first time, he can think of nothing better than taking another tilt at a first Stonehaven Cup.

“It’s one of those trophies in world golf that has such an incredible history,” Els said.

“I love playing national Opens and it’s been unfortunate that I haven’t been able to play for the Australian title more often with dates often clashing in South Africa.

“But this year the planets have lined up and I’m really looking forward to playing in Sydney.”

Golf Australia chief executive Stephen Pitt said the addition of these three champions was another great coup for the tournament.

“I think if you’ve watched all of these guys swing a club at some point in their careers, you’ve probably longed to be able to do it just like one of them,” Pitt said.

“Now all three are going to be in Sydney and all Australian golf fans can witness the magic first hand.

“We’re really excited about the field that’s being assembled and will announce more big names in coming weeks.”

The Emirates Australian Open is supported by the NSW Government via its tourism and major events agency, Destination NSW.

The tournament, being hosted by The Australian GC for a record 21st time, will be telecast live and exclusively each day through the channels of the Seven network.

The Emirates Australian Open a flagship tournament on the ISPS Handa PGA Tour of Australasia. The winner will receive a minimum of 32 Official World Golf Ranking points.

Tickets are now on sale. Visit www.ticketek.com and search “Open golf” to make sure you don’t miss seeing the world’s best golfers live in Sydney.